I'm a DIY vtuber - I drew and rigged my own model!

Check out my debut highlights video to learn more about me!

Good question! VTubers are people who make videos or stream with a virtual avatar on screen. Some of them roleplay as their avatar, others act pretty much like themselves but in their avatar's body, and sometimes they do both. It's pretty great! ✨

What do you stream?

I stream games as well as art! I'm open to doing more just chatting sessions too eventually. I'm still getting comfortable with streaming to be honest. 💦 I will do my very best!

Do you wanna collab?

Unfortunately I'm not open for collabs at this point. :( I'm not currently capable of planning and scheduling collabs, and I'm not open to discussing options either at the moment.

It's hard enough to get myself to stream solo or make my own schedule, so sadly it'd be too difficult on me to do collabs. I'm open to talking about collabs with friends I've previously collabed with before - even if I'm not currently able to do them.

(june edit: I've been reaching out to people for collabs at a pace that's comfortable for me!)

Wait, who are the people you usually stream with then?

If you see me hanging out with people on stream, it's most likely with my vtuber friend group Identity Lost! We've known each other for years, so it's very easy for me to vibe with them. 💕

I also often stream with the STREAM SQUAD! They're Identity Lost members that I've been streaming with ever since I started vtubing in 2020 - Koro, FranC, and Alex. We streamed an entire campaign of Divinity Original Sin 2 together!!

There are certain games that I'm comfortable with streaming, while other games I'd prefer to play in my free time. It can be hard work trying to stream and be entertaining while playing games (especially since I'm still getting used to streaming) so I try to stick with games that would mesh well with me! I hope you can understand. ❤

My streaming schedule is more sporadic as of late, since I've decided it'd be easier on me to stream whenever I like. I'll post on twitter and on discord whenever I do a schedule + stream though!

My timezone is GMT+3 btw!

How did you make your VTuber avatar?

I drew my 1.0 avatar model on my iPad with an app called Procreate! I edited the drawing in Photoshop in order to splice it apart, then I rigged it in Live2D.

I sketched my 2.0 model in Procreate, then moved it to Clip Studio Paint for rendering and splicing though. c:

What is your VTuber setup?

Two words: VTube Studio. It's an app on mobile and PC that I use as my face tracker. My iPhone X works as my webcam and transmits the face tracking information to the PC app, all without much of a burden on my CPU. It's fantastic, highly recommend it. I KNOW THIS SOUNDS LIKE AN AD BUT IT'S JUST THAT GOOD LMAO.

What do you use to draw?

When I stream art, I typically use my iPad Mini + Procreate cuz it's super comfy for me. 🎨 For bigger projects, I use my iPad Pro with Astropad or Easy Canvas in order to turn it into something like a Cintiq for my PC, then I draw on Photoshop or CSP.

I recently got a Cintiq 16 with the help of my wonderful community! So now whenever I stream art, I'm most likely using my Cintiq unless otherwise stated.

What is your iPad art stream setup?

Do you take commissions?

Not art comms yet! Thank you for the interest. I'm semi-open to rigging commissions.

Oh yeah, why do you have two discord accounts?

I'm on too many emote discords on my main account, so I made an alt so I could join more VTuber communities and hang out with more people. Turns out discord's cap is 100 servers btw LOL. I hope this answers a question some people may have!

Recently I got Discord Canary (alpha ver of Discord) so I've been running regular Discord + Canary to be online on both accounts. :3c

Email: fyrevt[at]gmail[dot]com
For business inquiries only. Otherwise feel free to DM me on Twitter!

You can find out more about my Live2D rigging commissions here: https://fyrecommissions.carrd.co/

Hi, I'm Fyre and I'm a feline fire elemental! 🔥 I'm a VTuber streamer who probably yells too much. I can be super hyper sometimes!!! 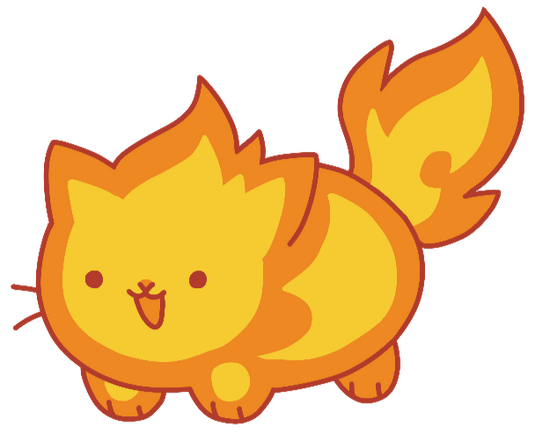